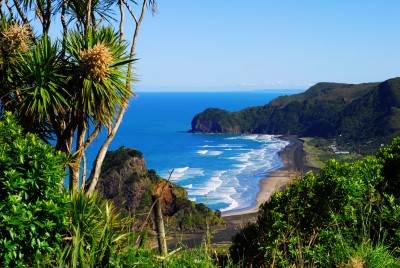 West coast has industries including coal mining and forestry and processing of woods. Fishing and farming is also developing as advanced industries in West Coast. Tourism in itself is a separate industry growing with rapid pace in West Coast. Out of the farming industries, dairy farming is highly popular. Manufacturing of green stone and jewelry out of it is another popular industrial business occurring in this land. All these industries have attributed to the growth of regional economy from this city, contributing to the wealth of New Zealand.

Flora and fauna of New Zealand are other major attractions of the land. You can see some rare birds with this land being their habitat. The local people of West Coast are generally known as coasters. This indicates their hospitality and friendly approach they show towards tourists. They have high values like self reliability and loyalty as their identifying characters.

You can see the pancake rocks and blow holes which are the famous attractions of West Coast. The beauty of pancakes lies in the thin, horizontal layered appearance with varying thickness. In short, West Coast and its beautiful glaciers creeping to the rain forests have a unique role in the life of New Zealand and its inhabitants. 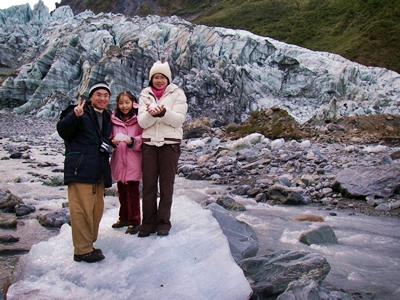 Operating out of Fox Glacier, this is an informative and leisurely trip to the dynamic face of the glacier. It is here that the Fox River emerges from the ice and where ice collapses are often heard and seen. This trip is for people with limited time or for those who would find the walks onto the glacier too strenuous. Although you will not walk on the glacier your guide will take you to the final resting place of the ice that has travelled 13 kilometres from the base of the Southern Alps, all the way to the river valley floor. Your guide may take you closer to the ice than the unguided public (if it is safe to do so at the time) and you will have the opportunity to learn the role of the Fox Glacier in shaping its environment. This two hour trip is reasonably easy going. About one and a half hours is spent walking over gentle terrain, over a river valley floor, at a speed that almost anyone can man.... 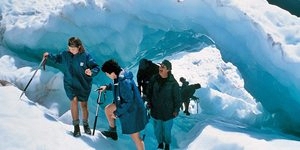 For those with a half-day available this popular trip operating out of Fox Glacier, is a great eco-adventure and full of variety and interest. Walkers are kitted out with sturdy leather boots and other equipment, before boarding one of our buses for the short drive through the rainforest and into the glacial valley. This valley was carved out by the ice during past ice ages and shows dramatic evidence of the power of the ice. Your guide leads you on a walk beside the river bed to the glacier terminus; from here you will walk uphill for around 30 minutes to access the edge of the ice. At this point you are outfitted with instep crampons specially designed for these ice conditions, and you follow the ice steps cut by the guides. The route takes you onto the ice amongst crevasses and ice ridges and leads you onto the middle of the glacier for spectacular views of the icefall and lower glacier. At least one hour is spent on the ice. Your guide will be with you for the duration of t....

This is an informative and leisurely trip to the dynamic face of the glacier which is suitable for children from 5 years. It is here that the Fox River emerges from the ice and where ice collapses are often heard and seen. This trip is for people with limited time or for those who would find the walks onto the glacier too strenuous. Although you will not walk on the glacier your guide will take you to the final resting place of the ice that has traveled 12 kilometers from the base of the Southern Alps, all the way to the river valley floor. Your guide may take you closer to the ice than the unguided public (if it is safe to do so at the time) and you will have the opportunity to learn the role of the Fox Glacier in shaping its environment. This two hour trip is reasonably easy going. About one and a half hours is spent walking over gentle terrain, up the left hand side of a river valley floor, at a speed that .... 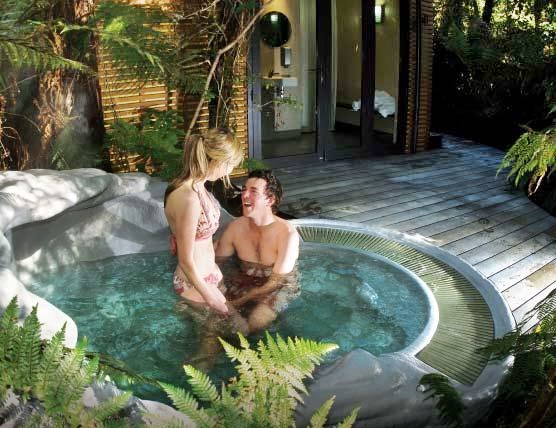 Nestled in lush rainforest, the Glacier Hot Pools is a haven of natural tranquillity and the perfect way for visitors to unwind and experience a blissful state of pure relaxation after travelling along Te Tai o Poutini (The West Coast) or enjoying one of its many attractions. The Glacier Hot Pools are fed by the waters of Ka Roimata o Hinehukatere, the frozen tears of Hinehukatere for her lost love. According to the legends of Ngai Tahu (the local Maori tribe), these tears of aroha (love) were frozen by the gods, forming what is known worldwide as the Franz Josef Glacier, or to Ngai Tahu as Ka Roimata o Hinehukatere – The Frozen Tears of Hinehukatere. The three invitingly warm main pools and three secluded private pools are nestled within the bosom of Tane Mahuta – Guardian of the Forest with his children, the native bush and birdlife creating a tranquil space to revive your tinana (body), hineng.... 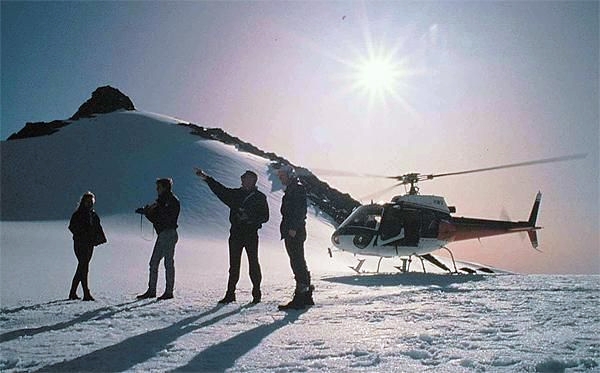 The scenic flights from Franz Josef and Fox Glacier locations will take your breath away as you discover that the stunning views of New Zealand's National Parks, glaciers, mountains and lakes are always best from above! The rugged West Coast is hemmed between the Tasman Sea and the imposing Southern Alps, making for spectacular contrasts in the surrounding scenery. The scenic flights fly from both Franz Josef Glacier and Fox Glacier villages, with an operating base situated on the main road of each. A 30 minute drive separates the Franz Josef Glacier and Fox Glacier villages. The perfect opportunity to get up close to the glaciers and touch snow. You'll be captivated as you lift off and fly up and over the Franz Josef Glacier or Fox Glacier and experience the solitude of a landing in this natural alpine wonderland. The fleet consists predominantly of European AS355 Twin Engine Squirrels, and AS350 .... 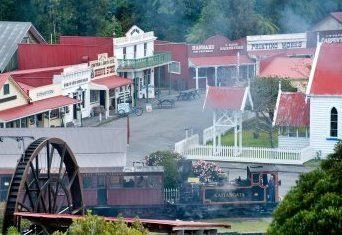 Shantytown Heritage Park is set on 500 acres of native rainforest. The town and surrounding buildings consists of 30 shops and buildings to explore. Children are well catered for at Shantytown with flying fox (zip wire) playground, treasure hunts to complete (available for Reuben Waite's General Store) bush walks and of course The Beehive packed with delicious old fashioned lollies (including the famous Remarkables Sweet Shop range) We recommend at least 1.5 hours to fully appreciate all of the attractions and activities that are available at Shantytown Shantytown is located on Rutherglen Road, Paroa (suburb), just 10Km south of Greymouth, on the West Coast of the South Island. Opening Hours: We are open everyday 8:30am to 5.00pm (Closed Christmas Day only) First Steam Train leaves the Shantytown Railway station at 9:45 am last train leaves at 4pm. Extra train trips may operate. Train t.... 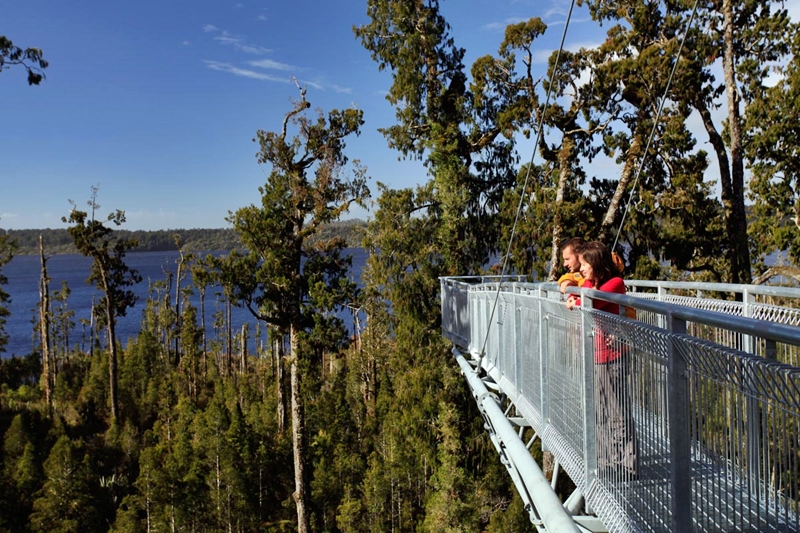 The Experience Lake Mahinapua is one of the finest spots around Hokitika for a day out or a quiet afternoon. The scenic reserve was gazetted in 1907 and provides a forested margin around the lake. The lake was once a coastal lagoon, but with the build up of coastal dune systems, became a shallow inland lake. Walkways The Walkways are wheelchair and pram friendly. Parents can let their children roam freely (whilst under direct supervision) as the walkways are completely enclosed to ensure their safety. Tower Thrill seekers will feel their hearts pump and the adrenalin rush as they climb to the top of Hokitika Tower 40 metres above the forest floor. Be inspired by a sensational vista of the majestic snow capped Southern Alps and the Tasman Sea. Cantilever Gently sway in harmony with the forest on the Mahinapua Springboard. View the exquisite Lake Mahinapua through the richly diverse for....